Background of the Epiretinal Prosthesis

In the late 1960’s, Potts and Inoue demonstrated the use of a contact lens as a stimulating electrode to evoke an electrically elicited response (EER) of the visual system of rats and humans.[1,2,3] Expounding upon their discovery, Knighton later specifically demonstrated the ability for inner retinal layers to be electrically stimulated to elicit an EER.[4,5] For a retinal prosthesis to be theoretically able to function, there must remain enough viable retinal cells to propagate an electrical signal through the inner retina and along the optic nerve and afferent visual pathway. As such, studies have demonstrated relatively good preservation of retinal inner nuclear and ganglion cells compared to photoreceptor loss in endstage retinitis pigmentosa and neovascular and non-neovascular age-related macular degeneration (AMD).[6,7,8] Further studies were undertaken, establishing the efficacy and safety of electrical stimulation of the retina[6,9,10] and led to the development of a more permanent implantable retinal prosthesis, starting with the ARGUS I and later the Argus II systems.[11,12,13,14,15,16,17] Argus II retinal prosthesis is the only retinal prosthesis currently FDA- approved in US. There is ongoing research in other epiretinal, subretinal, supra-choroidal, as well as cortical implants.

Potts AM, Inoue J. The electrically evoked response of the visual system (EER). 3. Further contribution to the origin of the EER. Invest Ophthalmol. 1970.

Argus II utilizes an external camera to capture and transform images into patterns of electrical stimuli that excite retinal neurons. The Argus II system consists of external wearable components and surgically implanted components (Figure 25.1). Spectacles with a camera capture the image and a video processing unit (VPU) then receives the image from the glasses (Figure 25.2). The VPU down-samples and processes the image into electrical stimulation data and sends it wirelessly to the electronics case via the receiving coil implanted on the globe. The electronics case generates the required pixelized stimulation output and sends it to the array of enabled platinum electrodes via a polymer cable with embedded wire conductors.

The surgically implanted components consist of the receiving coil and electronics case which are secured externally to the sclera. Subsequently a pars plana vitrectomy is performed and the 60-electrode array and the polymer cable are introduced into the vitreous cavity via a pars plana incision. The electrode array is positioned on the macula and secured with the use of a retinal tack. 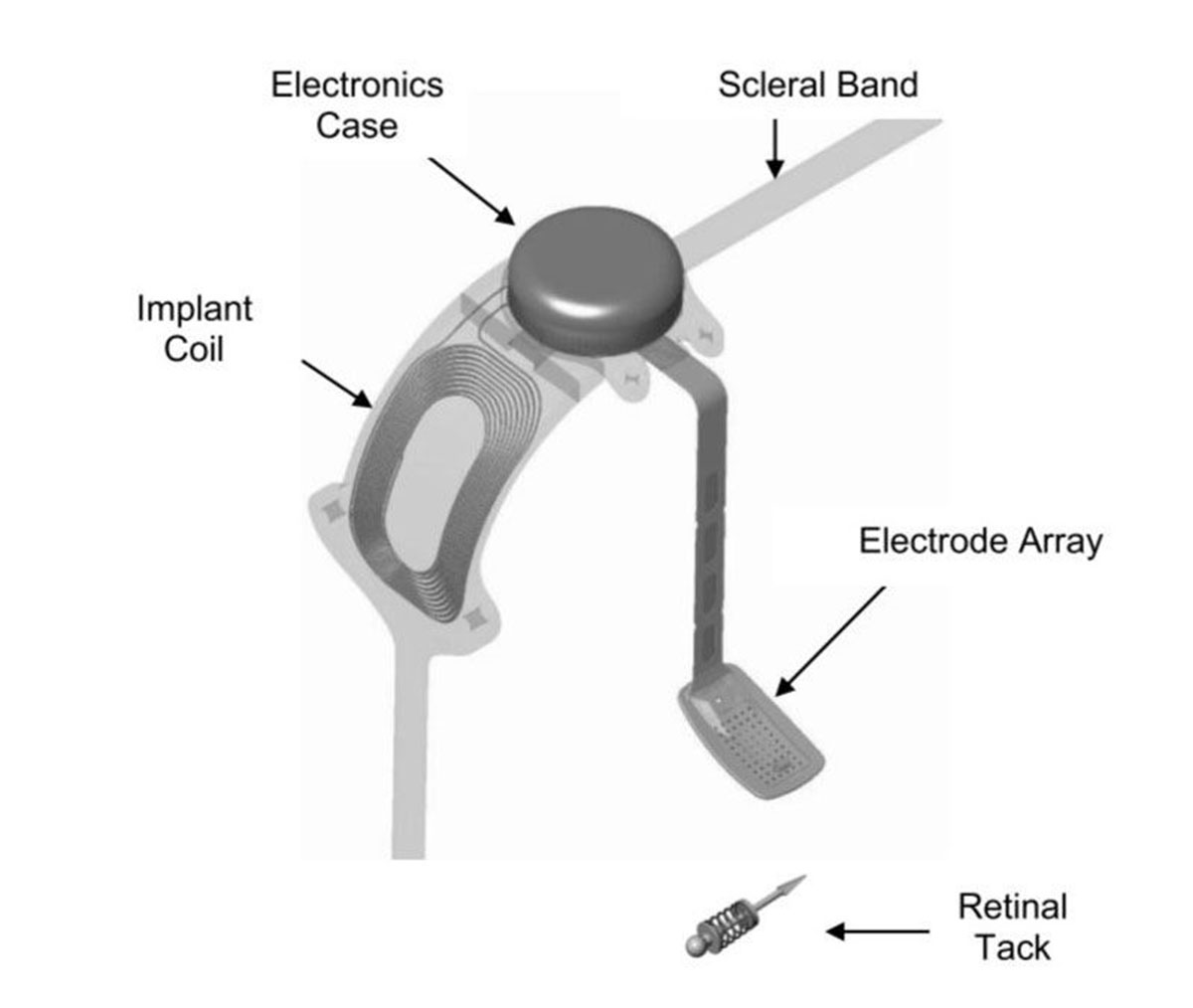 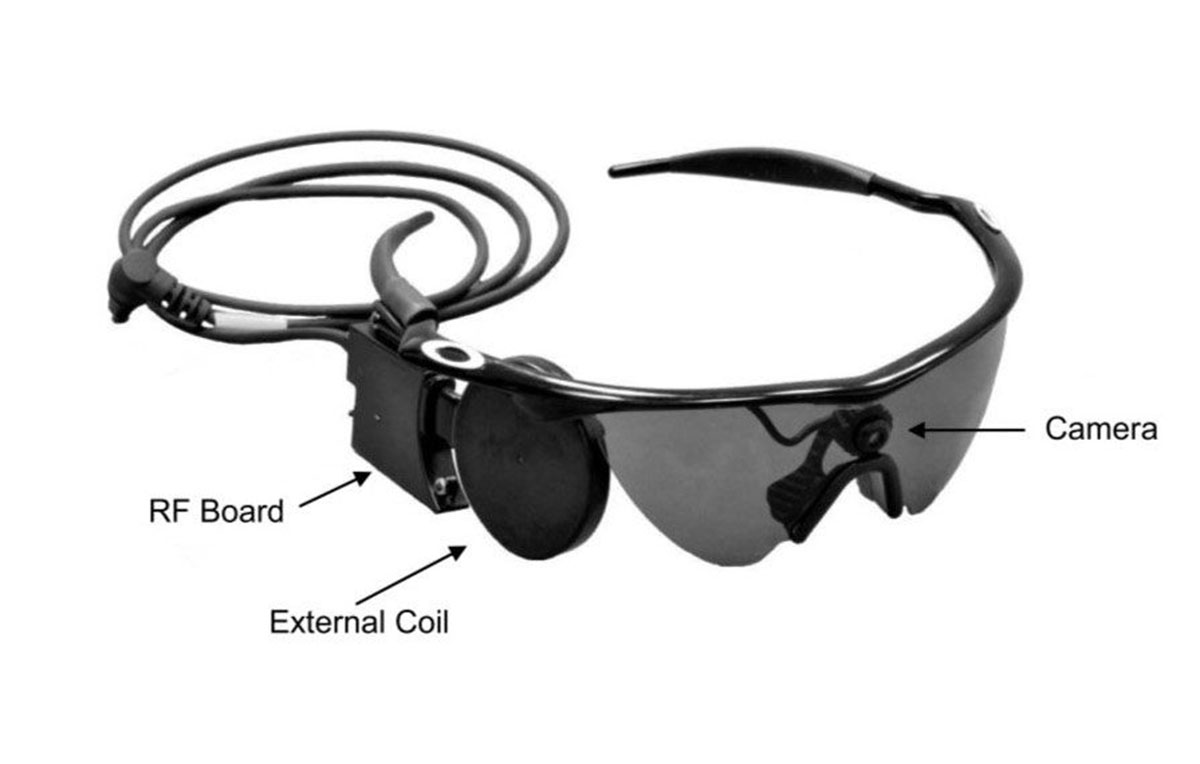 At this point, some surgeons prefer to protect the array by cutting the tip of a sterile glove, weaving a suture through the cut end like a purse string, inserting the array and tying the purse string suture with a slipknot 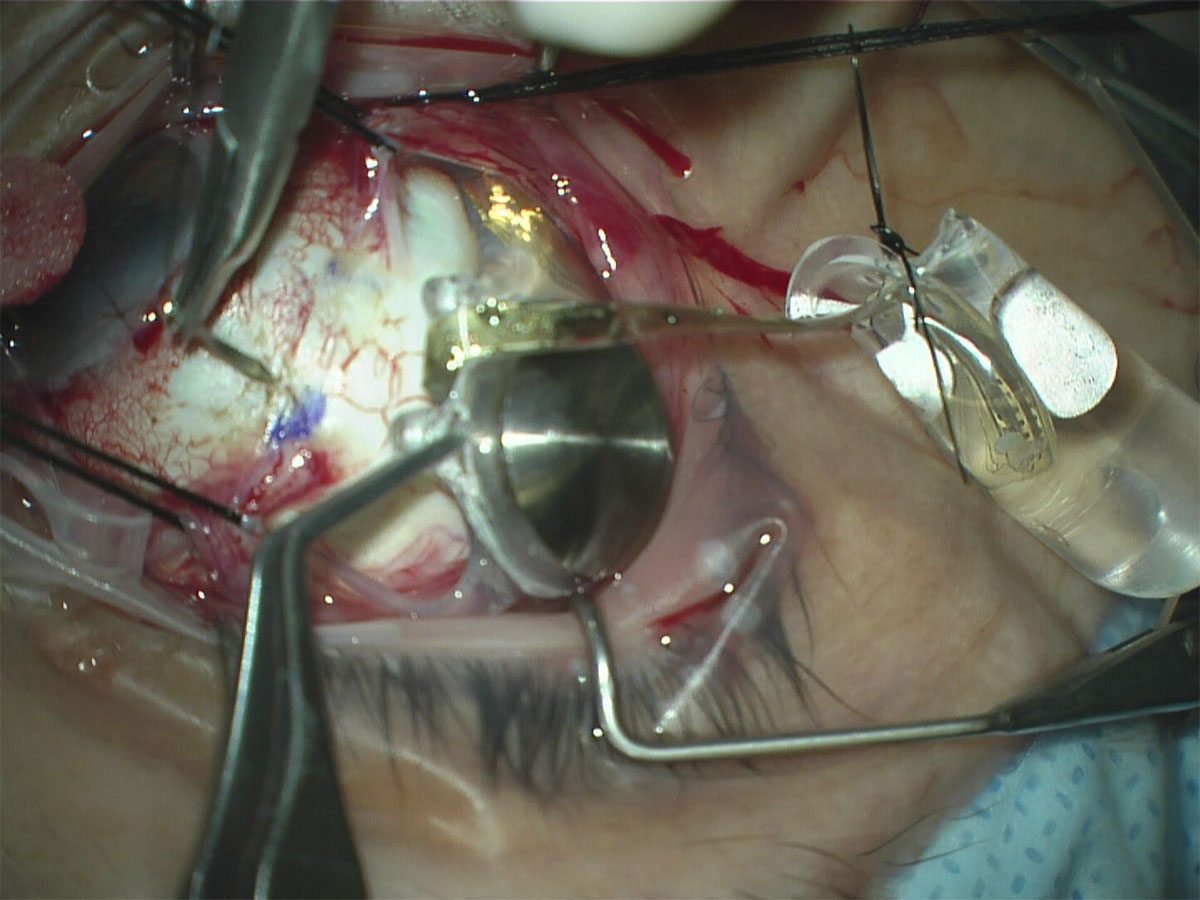 When manipulating the electronics case or array, be very careful not to damage the small electronics. Use silicone-tipped forceps for this reason